Rocky Mountain Beeplant, also called Bee Spiderflower or Navajo Spinach, is an Annual Wildflower Native to western North America from southern British Columbia, east to Minnesota and Illinois, and south to New Mexico and California. It grows up to 4 feet tall, with erect stems which are leafy and branching with leaves in a spiral. The showy clusters of flowers are reddish-purple, pink or white and produce copious nectar which attract bees. The stamens elongate throughout the season, extending beyond the petals and giving it a distinctive look. Rocky Mountain Beeplant likes gritty and arid soil. North American Indians and western settlers used the plant and flowers as an important potherb to treat fevers, stomach disorders and sore eyes. In times of drought, early Spanish-Americans ground and used the barely palatable but nourishing seeds in bread-making and for tortillas. Rocky Mountain Beeplant is a wild version and looks similar to the common garden Cleome or Spider Flower. It was included in the plant specimen collection made by Meriwether Lewis: "August 25, 1804, growth of the open Prairies". Plant in partially sunny areas in early Spring. Seeds Per Pound: 62,000 Acre Rate: 5 lbs Lbs per 1000sq feet:4 oz 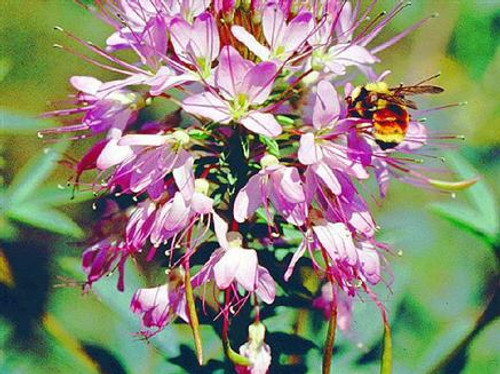