Bouteloua gracilis
Blue Grama is a long-lived warm season Native grass that is a drought tolerant, perennial open sod-former. Found throughout the Western Great Plains and the Southwest, it is densely tufted and commonly grows from 6 to 24 inches tall. Has gray - green basal leaves and grows in bunches in the south, but as a sod-former in the north in colder climates. Adapted to a broad spectrum of soils but thrives on medium textured, well drained sites. Most drought resistant of the major grasses in the Great Plains. Cures well as hay for winter use. Highly palatable all year long, Blue Grama is rated as the choice forage for all classes of livestock.
For better seedling establishment, Blue Grama seed should be planted with grass drills ¼ to ½ inch deep. Can be broadcast and covered with soil to similar depths. Suitable planting dates are April to Mid May in the Central Plains, slightly earlier in the Southern Great Plains. June 15 to July 15 in the Southwest. The time of year for seeding depends upon local rainfall patterns. Timely irrigation or rainfall just after planting of the seed is essential to seedling establishment.
Growing Height: 24"
Min Yearly Rainfall: 12"
Seeds Per Pound: 825,000
Acre Rate: 4 to 10 lbs
Lbs per 1000 sq feet: 2 lbs
Growing Regions:West, Northwest (not including Oregon and Washington), Midwest, North East, Florida, and South Carolina 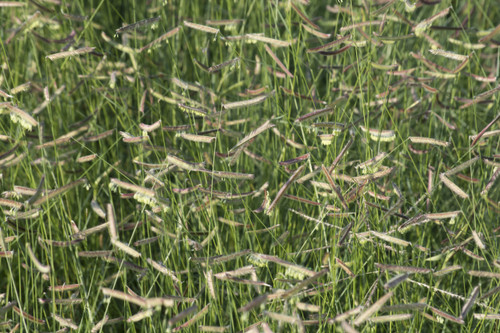