Sporobolus airoides
Alkali Sacaton is a tough perennial grass, two to three and a half feet tall, growing in large coarse bunches. It produces red colored seed heads in summer to early fall. In areas with salt, alkali, drought and occasional cloudbursts, the importance of this Native grass is well known to ranchers and range men alike. Alkali Sacaton is often found growing on alkaline flats, prairies, and sandy plateaus and is common along drainage in desert and semi-desert areas. It is eaten by livestock when it is green, and produces abundant forage but does not cure as a palatable winter feed. Not only is Alkali Sacaton used as an attractant, it can be used as an ornamental plant in salty or alkaline soils.
Growing Height: 12 to 42"
Min Yearly Rainfall: 6"
Seeds Per Pound: 1,758,000
Acre Rate: 3 lbs
Lbs per 1000sq feet: 0.25 lbs
Growing Regions:West (not including Western Washington, Western Oregon, Western California, and Northeastern Montana), Southwest (not including Eastern half of Texas and Eastern Oklahoma), Greatplains 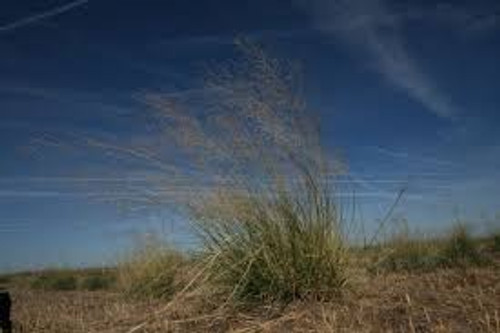