Ericameria nauseosa or Chrysothamnus nauseosus Rubber Rabbitbrush, also commonly called Chamisa in the High Desert, is a perennial deciduous Native shrub, with aromatic, blue-green-grey, feathery foliage in Summer and dense clusters of bright-yellow flowers in early Fall. It grows well in semi-shade, and prefers medium levels of water and low fertility. This plant requires a minimum of 150 frost free days to grow, and needs cool temperatures in the Summer. Though it is good for stabilizing open, waste places, it is not considered a rangeland type as wildlife and cattle tend to not touch it. This attractive drought tolerant shrub can thrive beautifully in the landscaped garden or be at home in natural environments. Many roadsides and natural higher elevation open areas are dotted with these soft, mounded Summer green shrubs from 4-7 feet in height, which explode into bright yellow flowers in the Fall. In the High Desert, Chamisa is an indicator of the coming Fall and becomes a major component of the color palette. Its pungent flowers give way to fluffy seed heads, which eventually dry and along with the bleached and wiry stems and leaves add textural and color interest to the Winter landscape. Rubber Rabbitbrush can be pruned strongly before each Spring. This rejuvenates the plant and creates a thick, bushy shrub, and allows new growth and blooms to readily sprout before the next growing season. Chamisa pollen is known to cause allergic responses in some people. The Rubber Rabbitbrush is the oldest known indigenous yellow dye and has been used for the rich yellow color found in Native American blankets. Spanish-Americans mixed it also into a solution for a yellow paint. A tea was made from the plant to control fever, and in more modern times, it is used to produce latex. Seeds can be sown anytime, it will take 2-3 years to fully establish as a shrub. Growing Height: 24 to 84" Min Yearly Rainfall: 6" Seeds Per Pound: 400,000 Growing Region:Northwest, West, Southwest (not including Central and Eastern Texas) 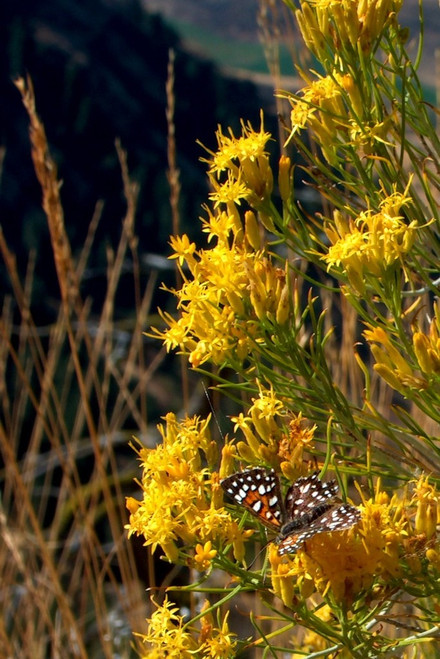