Atriplex canescens Four Wing Saltbush, often called "Chamiza", is a grayish-white, freely branched Southwest Native shrub which has wingend seeds. It characteristically inhabits dry, moderately saline or alkaline soils of drainage ditches and foothill regions. It is frequently the dominant species over extensive areas. It grows best on soils of a basic or calcareous nature. Sheep and goats readily graze on this Native species. Cattle and horses find the plant nutritious and usually graze on this plant throughout the Winter months. Wildlife such as deer will feed upon this plant especially during the winter. Quail use Four-Wing Saltbush as cover, a place to roost, and as a food source. As a low maintenance, drought tolerant, native species, Four-Wing Saltbush is an excellent choice for native landscaping. Not to be confused with Rubber Rabbitbrush (Ericameria nauseosa or Chrysothamnus nauseosus) which has yellow flowers and is often called Chamisa in the Southwest. The name origin of both plants is the old Spanish word 'chamiza', which means brushwood. Picture Provided By: Loren St. John @ USDA-NRCS PLANTS Database Growing Height: 24 to 72" Min Yearly Rainfall: 8 to 12" Seeds Per Pound: 52,000 Acre Rate: 16 Lbs per 1000 sq feet: 0.5 lbs Growing Region:Northwest (not including Western Washington and Western Oregon), West (not including Northern California), Southwest (Not including East half of Texas and Oklahoma) 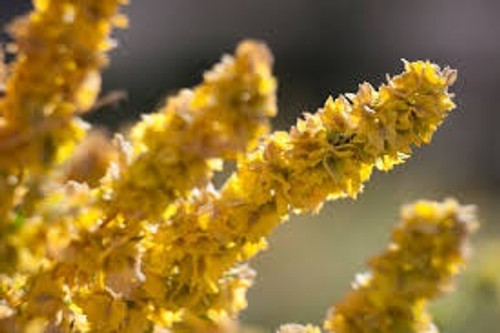