The California State Flower, California Poppy is an upright, compact tender perennial native to California and Oregon, but is adapted throughout the Western United States below 4,000 ft. in elevation. The plants have feathery, highly dissected, blue-green leaves which clasp stems that grow from 12 to 24 inches tall. The four petal flower is orange to pale yellow in color. California Poppy is adapted to many conditions, but needs well-drained soil and full sun. In areas where winters are very mild, seed can be planted in the fall; in all other areas, plant seed in the early spring. Once established, California Poppy can re-seed itself, often in colonies. This flower is remarkably uniform, neat in appearance and has a wide range of uses including fire re-seeding, re-vegetation, highway beautification, and home gardens. Growing Height: 12" to 18" Seeds Per Pound: 293,000 Acre Rate: 5 lbs Lbs per 1000 sq feet:4 oz Growing Region: West, Southwest, Great Plains (not including Eastern South Dakota, Eastern North Dakota), Missouri, Southwestern Iowa, Lower Southeast 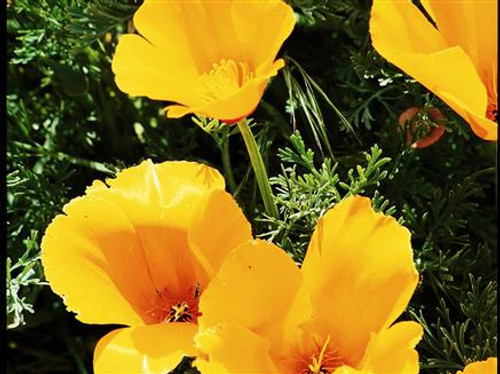