Elymus elymoides
Bottlebrush Squirreltail is a short-lived perennial bunchgrass which grows 6 to 18 inches tall. The seed head is a dense bristly spike, giving it a bottlebrush or squirreltail-like appearance. It is a Native grass with a wide range in the West, from desert flats to steep mountain slopes, very drought tolerant and common on disturbed sites. In large and dense stands, Bottlebrush Squirreltail is very effective for wind and water erosion control. As a reclamation species, it has great potential as an early-seral species by competing with annual weed species. It is one of the most fire resistant native bunchgrasses, because older plants have relatively low amounts of dead material. Bottlebrush Squirreltail can be seeded in early Spring, but late dormant Fall seeding is recommended for best annual weed suppression.
Growing Height: 6 to 18"
Min Yearly Rainfall: 5"
Seeds Per Pound: 180,000
Acre Rate: 7 lbs 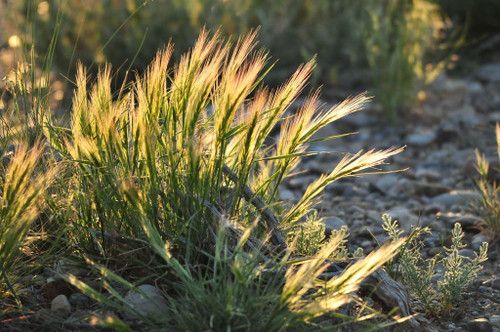