Black Eyed Susan is a stiff, upright annual, biennial or short lived perennial, Native to the eastern United States, but has become endemic throughout North America. The Black Eyed Susan, also known as Hairy Coneflower blooms from late June through August. The characteristic brown, domed center is surrounded by bright yellow ray florets. The leaves are hairy, oval to lance-shaped with stems which are too scratchy to touch. It thrives in most soils in full sun, is quite adaptable and can hold up to some neglect. Average height of the yellow flower is 12 - 36 inches. Black Eyed Susan is used mainly for landscape beautification however it has potential use for cultivated, garden situations, or in naturalized prairie or meadow plantings. Seed may be planted almost any time during the growing season, but late Summer planting (August - September) often produces the largest stands. A firm seedbed is required, seed should be placed close to the soil surface followed by cultipacking to ensure good seed-to-soil contact. Seed germination usually occurs by Fall, but occasionally may be delayed until Spring. Spring germinating Black Eyed Susan plants begin flowering a bit later than normal and generally continue flowering until frost. Growing Height: 12" to 36" Min Yearly Rainfall: 12" Seeds Per Pound: 169,700 Acre Rate: 5 lbs Lbs per 1000 sq feet:4 oz Growing Region:All 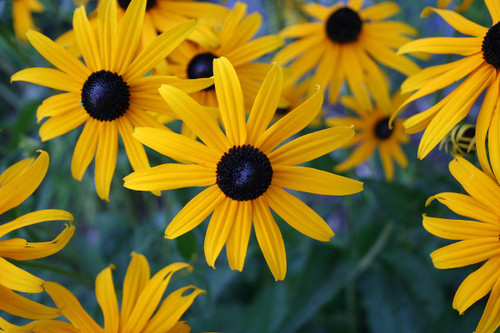